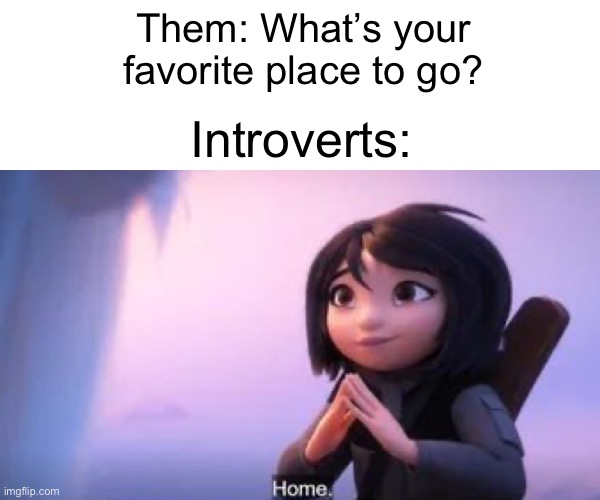 Introverts are notoriously small talk-phobic, as they find idle chatter to be a source of anxiety, or at least annoyance. For many quiet types, chitchat can feel disingenuous.

If you’re an introvert, you may sometimes enjoy going to parties, but chances are, you’re not going because you’re excited to meet new people. At a party, most introverts would rather spend time with people they already know and feel comfortable around. If you happen to meet a new person that you connect with, great — but meeting people is rarely the goal.

3. You often feel alone in a crowd.

Ever feel like an outsider in the middle of social gatherings and group activities, even with people you know?

“If you tend to find yourself feeling alone in a crowd, you might be an introvert,” says Dembling. “We might let friends or activities pick us, rather than extending our own invitations.”

Networking (read: small-talk with the end goal of advancing your career) can feel particularly disingenuous for introverts, who crave authenticity in their interactions.

“Networking is stressful if we do it in the ways that are stressful to us,” Dembling says, advising introverts to network in small, intimate groups rather than at large mixers.

Do you have a penchant for philosophical conversations and a love of thought-provoking books and movies? If so, you’re a textbook introvert.

“Introverts like to jump into the deep end,” says Dembling.

While extroverts tend to get bored easily when they don’t have enough to do, introverts have the opposite problem — they get easily distracted and overwhelmed in environments with an excess of stimulation.

“Extroverts are commonly found to be more easily bored than introverts on monotonous tasks, probably because they require and thrive on high levels of stimulation,” Clark University researchers wrote in a paper published in the Journal of Personality and Social Psychology. “In contrast, introverts are more easily distracted than extroverts and, hence, prefer relatively unstimulating environments.”

7. Downtime doesn’t feel unproductive to you.

One of the most fundamental characteristics of introverts is that they need time alone to recharge their batteries. Whereas an extrovert might get bored or antsy spending a day at home alone with tea and a stack of magazines, this sort of down time feels necessary and satisfying to an introvert.

8. Giving a talk in front of 500 people is less stressful than having to mingle with those people afterwards.

Introverts can be excellent leaders and public speakers — and although they’re stereotyped as being the shrinking violet, they don’t necessarily shy away from the spotlight. Performers like Lady Gaga, Christina Aguilera and Emma Watson all identify as introverts, and an estimated 40 percent of CEOs have introverted personalities. Instead, an introvert might struggle more with meeting and greeting large groups of people on an individual basis.

9. When you get on the subway, you sit at the end of the bench -– not in the middle.

Whenever possible, introverts tend to avoid being surrounded by people on all sides.

“We’re likely to sit in places where we can get away when we’re ready to — easily,” says Dembling. “When I go to the theater, I want the aisle seat or the back seat.”

10. You start to shut down after you’ve been active for too long.

Do you start to get tired and unresponsive after you’ve been out and about for too long? It’s likely because you’re trying to conserve energy. Everything introverts do in the outside world causes them to expend energy, after which they’ll need to go back and replenish their stores in a quiet environment, says Dembling. Short of a quiet place to go, many introverts will resort to zoning out.

11. You’re in a relationship with an extrovert.

It’s true that opposites attract, and introverts frequently gravitate towards outgoing extroverts who encourage them to have fun and not take themselves too seriously.

“Introverts are sometimes drawn to extroverts because they like being able to ride their ‘fun bubble,’” Dembling says.

12. You’d rather be an expert at one thing than try to do everything.

The dominant brain pathways introverts use is one that allows you to focus and think about things for a while, so they’re geared toward intense study and developing expertise, according to Olsen Laney.

13. You actively avoid any shows that might involve audience participation.

Because really, is anything more terrifying?

14. You screen all your calls — even from friends.