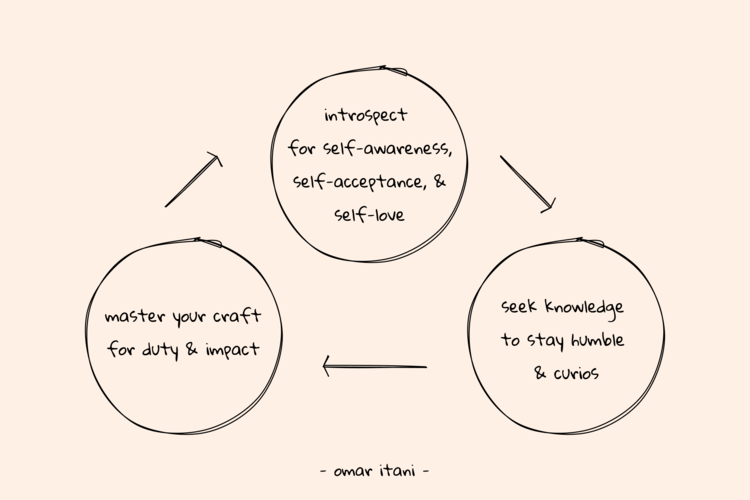 It doesn’t take much to live a great and original life.

Nowadays, people often associate it with quitting the corporate job to travel the world, building an 8-figure business, mastering five languages, accumulating a massive online following, or building some sort of good-cause charity.

Truth is, it’s about none of that.

At its core, living a great life is measured by how deeply you touch people in your life. It’s as simple as that. It’s not a gauge of quantity, but quality.

“What counts in life is not the mere fact that we have lived. It’s what difference we have made to the lives of others that will determine the significance of the life we lead.”

As a creative, the way I see it, living a great life is the result of first tapping into your inner well of creative potential for making a change, and then leveraging that potential to contribute something meaningful to this world. That’s it.

It’s not about the size of that contribution or how many people it touches.

It’s about the impact that contribution can have on one other soul, and how expressive, content, and fulfilled it makes you feel.

Think about anyone who’s created something original and achieved a sense of greatness in their life, and you will begin to spot a pattern.

Vincent Van Gogh achieved greatness with his paintings only after his death, but he only began walking that path at the age of 28. It was the first time he had ever picked up a brush. He aimed his sight inward and that shift in direction allowed him to unravel a hidden love for expressing himself artistically.

Writers Brené Brown and Malcolm Gladwell, both achieved greatness in their writings. What fuses their success? Their eagerness to keep learning and expanding the depths of their mind.

What about modern-day thinkers? Consider James Clear, habit expert and author of Atomic Habits, or Tiago Forte, one of the world’s foremost experts on productivity and eventual creator of Forte Labs. The former helps people build better habits and the latter helps them build systems for higher productivity.

None of the people mentioned above are (or in the case of Van Gogh, were) extraordinary people, but they did achieve and continue to achieve, extraordinary results. What do they all have in common?

They pursued originality over conformity.

How did they do it?

They followed a specific pattern.

Here are three ideas on how to design a great life where you do creative and original work that makes a massive impact on others.

1. Raise Your Self-Awareness: Introspect Before You Prospect

All the names mentioned above are people who selflessly gave something of themselves to the world. Whether it be through the form of colours, words, or training, expressed through painting, writing, or coaching, they created art.

In his book, Atomic Habits, James Clear explains that “for years” before November 2021, the time when he first began publishing articles on his blog, “he had been keeping notes about his personal experiments with habit.”

Not many people realize this, but Vincent Van Gogh was a writer as much as he was a painter. In one of his many letters to his brother Theo, Van Gogh wrote:

“This morning I saw the countryside from my window a long time before sunrise, with nothing but the morning star, which looked very big.”

His introspection guided him, for those were the words, and that was the night, that inspired one of his most famous paintings, The Starry Night.

So what’s the salient point I’m trying to make here?

It’s that we cannot create or give from that which we don’t have. We cannot make much of a difference in someone else’s life if we don’t first take the time to reflect and process our own emotions so we can better understand ourselves. If we don’t first look inside ourselves before we look outside. If we don’t first disconnect from the world to reconnect with ourselves.

You need to tune out the noise if you wish to make music.

It might sound silly to you, but its implications are astounding.

As your self-awareness grows, the habitual internal struggle that arises when you’re suddenly faced with an important life decision slowly begins to fade away.

Your decision-making process becomes sharper, clearer, and simpler. Why? Because you now know who you are: You know your values, what you stand for, what aspirations matters to you and what don’t.

You become more in-tune with your authentic self, hence, you create a finer alignment between the inside and the outside. Truth is, your self-awareness is what strengthens your intuition. And an affinity with your intuition is what you need if you are to forge a path to call your own in life.

Over the span of two decades, author and psychologist Malcolm Gladwell has published over five New York Times bestselling books. His work has become so influential that he’s been included in the TIME 100 Most Influential People list.

But if we take a closer examination of his work, we notice a trend:

The second idea for living a great life is quite simple, but its implications are profound: Become a lifelong learner. Become a student of life, for life. Ask more questions and seek better answers. Flame your curiosity and allow it to guide you into the boundless unknown.

That’s the gateway to originality and impact.

As psychologist Adam Grant writes in his book, The Originals:

“The hallmark of originality is rejecting the default and exploring whether a better option exists… The starting point is curiosity: pondering why the default exists in the first place.”

And as Lao Tzu wrote thousands of years ago in the Tao te Ching:

“Not to know the things you ought to know is folly. To know that there are some things you cannot know is wisdom. The wise recognize the limits of their knowledge; the foolish think they know everything.”

The foolish grow more and more foolish as they continue to bask in their own ignorance, while the wise become wiser as they remain in their orbit of humbleness while eagerly flaming their own curiosity for more knowledge.

Becoming a lifelong learner is what fills your sails with wind. It keeps your curiosity burning, while also keeping you humble, as time and time again, you’ll circle back to the realization that many of your limitations are your own making.

At the end of that day, the foolish might live a good life, but only the wise will have any chance at designing and living a great one. There is, however, a very thin and delicate line here: Consuming existing knowledge is not the same as exploring your own ideas and creating new insights.

To be original and make an impact, there’s one more thing you must do.

3. Think Like a Craftsman: Choose a Craft You’re Good at and Slowly Master it

“What’s something I’m good at, something I also enjoy doing and I’m willing to get better at and eventually master?”

What do all these people have in common?

That’s the third and final idea for designing and living a great creative life.

It’s about pursuing that purpose passionately.

As Carl Newport writes in his book Be So Good They Can’t Ignore You:

That’s why the third idea is to choose a craft and slowly master it.

Because when you vow to always look inward, you will naturally become more authentic. And when you vow to become a lifelong learner, you will naturally begin to explore what you’re interested in and what you’re good at. All that’s left then, is for you to choose a craft to call your own and slowly, over years upon years, practice it, hone it, and bring your own ideas to it.

Eventually, the time will arrive when you will feel compelled to use your own skills to be in the service of others. To help people solve their own problems. For these are the skills that helped you solve yours.

So here’s a question for you:

If time lost its dominion over you, what would you do?

Your answer is a good indication of the craft you must further explore.